Medical Formula ProImmuno® is a product composed of carefully selected natural ingredients that create a unique composition, consistent with the principles of synergism. The operation of many of the raw materials used has been confirmed by numerous scientific publications and clinical trials. In the light of scientific research, the ingredients of DuoLife Medical Formula ProImmuno® can directly contribute to supporting the body in the fight against viral infections and bacterial infections. They can also support the body in the fight against the inflammatory process accompanying infections. 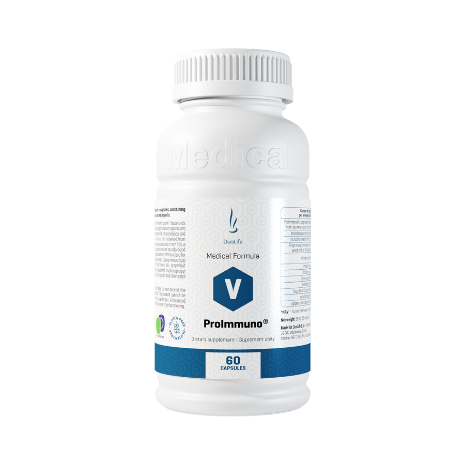 Supports the body in the fight against viral infections and inflammations
Specially selected ingredients of the product support the immune and respiratory system, helping the body fight infections typical of the autumn, winter, and spring season, such as flu or other viral infections. They help to protect the body in states of reduced immunity, especially in the season favorable for infections.

High, clinically proven bioavailability of ingredients
A number of manufacturers select the composition of the product only in terms of the amount of active substances. At DuoLife, the same importance is attached to the degree of their absorbability. Only high bioavailability guarantees effective action and a pro-health effect.

The innovative combination of standardized phytonutrients
Standardization of raw materials guarantees that each dose of the preparation contains the same dose of active ingredients.

Known sources of ingredients and their effects confirmed by tests
The origin of the raw material materially affects its quality. DuoLife makes sure that raw materials come from the most valuable varieties and regions, and their action is confirmed by the latest scientific research.

Synergy of action
Synergism is the interaction of nutrients that can help them get into the cells of the body in the maximum amount, and also strengthens their individual effect. Taking care to exclude antagonists that block the absorption of active ingredients allows for an additional increase in bioavailability. Applying both principles at the same time allows you to increase the absorption and optimize the performance of the product.

Proprietary formulas
Rich, unique, and patented composition enclosed in innovative formulations, registered with the ® mark, is a production secret of DuoLife.

Natural phytonutrients
All the ingredients applied are 100% natural. The DuoLife Medical Formula ProImmuno® product does not contain any artificial colorings or preservatives. The company also says a loud „no!” to GMO.

100% safe
Ingredients of the product are entirely safe, certified, and subjected to numerous clinical tests.

1
Step 1
Proper absorption thanks to the high bioavailability of the ingredients
2
Step 2
Support in the fight against viruses and inflammation
3
Step 3
Neutralization of free radicals
4
Step 4
Support of the overall condition of the body
For the safety of the body, choose DuoLife Medical Formula ProImmuno® and do not let viruses get you!
Download the education card
Download the bibliography
Watch the educational video
Discover ingredients of DuoLife Medical Formula ProImmuno®
Quercetin – DuoLife Medical Formula ProImmuno uses a proprietary formula for Japanese pagoda tree flower extract, standardized for quercetin, based on the phospholipid technology ®. As a result, the bioavailability of quercetin and its pharmacokinetic profile is much better than if a regular raw material was used.
As research shows, the extract in the form of phospholipid formula is up to 20 times more bioavailable compared to the traditional quercetin extract. Importantly, the quercetin dose used in the preparation (250 mg) is a dose with high bioavailability confirmed by scientific research.
Quercetin alone features three main directions of health-supporting effect:
• it supports the immune system,
• promotes the fight against inflammation,
• acts as a natural antioxidant.
Quercetin belongs to the group of flavonoids, which – according to many people, including the latest research – shows an effect that can directly support the body in the fight against viral infections.
Quercetin directly supports the optimal functions of the respiratory and immune systems, thus helping to protect the body in states of reduced immunity and in the season favorable for infections. By its health-supporting effect, quercetin also helps to maintain the optimal condition of the heart, blood vessels, joints, and gastrointestinal tract. It promotes the good general condition of the body, which is extremely relevant to the effective fight against viral infections.
In clinical trials, quercetin shows a beneficial effect on the functions of the respiratory and circulatory systems, as well as on supporting the body in the fight against allergies, including asthma and allergic rhinitis. Quercetin also boosts the effect of vitamin C, which makes it perfect for supplementation with DuoLife Vita C.
Luteolin and apigenin – DuoLife Medical Formula ProImmuno uses luteolin from Japanese pagoda tree flower extracts and apigenin from grapefruit, both in a strictly standardised dose.
These ingredients belong to the group of flavonoids and feature valuable health-promoting properties. Scientific research, including the latest one, has shown that luteolin and apigenin contribute to the support of the immune system and body health during viral and bacterial infections. As precious antioxidants, they support functioning of the cardiovascular system, help to regulate cholesterol and blood glucose levels and contribute to slowing down the ageing process.
Organic zinc – DuoLife Medical Formula ProImmuno uses a proprietary organic zinc formula derived from inactivated cells of the Saccharomyces cerevisiae yeast.
The formula was created according to a special process that allowed to achieve standardized increased levels of zinc and valuable nutritional values of yeast: vitamins, especially from group B, minerals, amino acids, fib,er and others. The above ingredients are better absorbed due to the fact that their biological background has been retained. In addition, B vitamins and fiber provide natural support for the functioning of the gastrointestinal tract.
Zinc alone contributes to maintaining systemic homeostasis, is involved in the body’s immune processes, minimises the toxic effects of heavy metals on the functions of systems and organs. It is also a valuable antioxidant protecting cells against oxidative stress. Scientific research clearly demonstrates that zinc plays an important role in helping the body fight viral infections.
Green propolis – considered one of the most valuable propolis in the world, it is a product collected by honey bees from the Brazilian plant Baccharis dracunculifolia, typical of tropical regions. Its green color is there due to chlorophyll present in young plant tissues.
Green propolis contains lots of important ingredients, among others, polyphenols, vitamins and minerals, but the most valuable one is artepilin C, which shows the effect supporting the body in the fight against bacterial infections and inflammation. The raw material contained in the DuoLife Medical Formula ProImmuno diet supplement is standardized for artepillin C, which guarantees that the preparation contains its specific dose.
Numerous scientific research confirms that green propolis demonstrates an effect that can support the body in the fight against bacterial, viral (including influenza viruses), fungal and parasitic infections. In addition, it can contribute to reducing inflammation.
(European) brown propolis – extract – an ingredient that has been positioned in numerous scientific research as extremely valuable in terms of supporting the immune system. The raw material, the extract of which was used in the DuoLife Medical Formula ProImmuno® dietary supplement, is a product collected by honey bees, mainly from black poplar, which ensures it a valuable composition and health-promoting properties. The scientific research confirms that the health-promoting effect of propolis extracts is dependent on the presence of numerous natural polyphenolic compounds, such as galangin.
Brown propolis features an action documented by numerous scientific, clinical, and preclinical studies that can help the body in the fight against viral and bacterial infections. Propolis also supports the condition of the immune system, helping to protect the organism during the autumn or spring solstice, as well as promoting proper functions of the respiratory system.
Red sage (danshen, Chinese sage) – an extract from the roots – has a health-promoting effect documented by scientific and clinical studies. It not only supports functions of the immune system, but also operation of the respiratory tract. It contributes to keeping the correct level of cholesterol and glucose in the blood, supports the

operation of kidneys, heart and the central nervous system. It has a positive effect on the good general condition of the body, which is of particular importance in the context of influence of red sage on the fight against viral infections.
As a dietary supplement, danshen is the first traditional Chinese health-promoting plant to be entered in the American Pharmacopoeia and the first approved for clinical trials by the FDA (Food and Drug Administration). Its extremely valuable active ingredients are tansinones, especially tansinone IIA, which in an in vitro study demonstrated a direct effect that can help protect the body against viruses. The raw material contained in ProImmuno® is standardised for tanshinone IIA, so this guarantees the presence of a specific dose of this ingredient in the preparation.

There are no reviews yet.